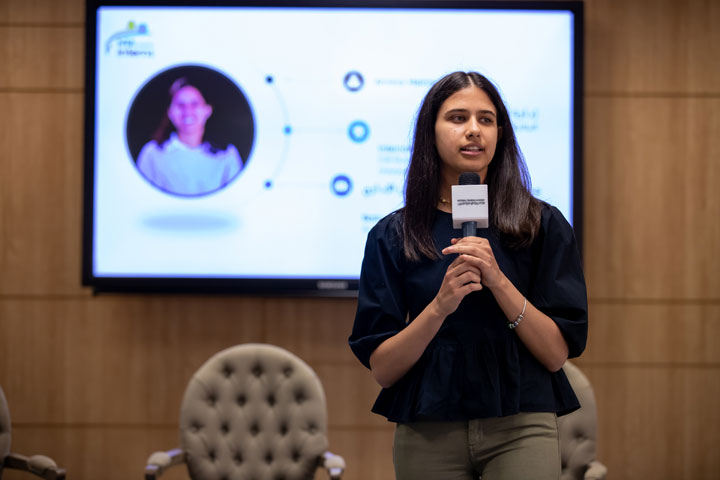 On Sunday, June 6th, The National Training Academy launched the internship program "NTA Interns" to train graduates of Egyptian universities in the various academic departments, believing in its role towards society. This allows graduates to benefit from training during the summer, and gain experiences that help them get better jobs. Also, this is the result of fruitful cooperation between the Academy and various Egyptian universities, thus achieving important steps in the human development of the Egyptian state by developing young people who belon to a younger age group that that required for the programs offered by the academy.

The first day started with 22 interns as a first batch; they attended an introductory session entitled ‘The National Training Academy, the National Project for Qualifying Human Capital.’ Interns were introduced to the vision and mission of the Academy, its establishment, the services it provides, and its international partnerships. Then, representatives of the departments explained the role and tasks performed by the various departments, and then interns were taken on a tour inside the buildings of the Academy.

Dr. Rasha Ragheb, Executive Director of the National Training Academy, asked to meet the interns on their first day and had an open discussion with them about the internship program and its goal. She emphasized the difference of this program from all the training programs offered by the Academy, and said: “It is a practical program to qualify young people for the labor market." She added, “There is a gap between the needs of the labor market and the skills of fresh graduates." She stressed that the Academy is not a gateway to occupy leadership positions. Its training methodology leads to the development of leadership and management skills to form an integrated personality among all graduates in various programs. Therefore, the Academy continuously receives requests by decision-makers and state officials of Academy's graduates' assistance.

The launch of the program was preceded by communication from the National Training Academy with all Egyptian universities to receive their student nominations for the internship program. This was greatly welcomed by the presidents of the universities. Indeed, the nominations were sent, and the filtering and selection stages took place within the Academy. This included language tests, general knowledge tests, psychometric tests, and then personal interviews.

The training period is scheduled to be three months (until next August), and the training program is divided into three phases. It starts with the preparatory program, where the interns will be introduced to the Academy, its activities and mission as well as the tasks of different departments with their organizational structure. Then, the interns will be distributed to all departments to start their training and gaining experience. Then comes the final program, in which a full assessment of the experiences and knowledge acquired by the interns will be conducted in all the fields they have gone through in the academy, and their personalities will be evaluated to determine strengths and areas of development. A self-development plan will be made for each intern to work on it after the end of the program, and interns will be receiving training certificates. All this will be done under the supervision of the department directors in the Academy.

Back to Press Releases